Anybody who knows the town where I grew up will recognize Graycliff as a close relative immediately. The city is primarily defined by two features: Graycliff Ridge, a granite shelf that runs north-south just west of the bulk of the town, and the Zephyr River, which loosely defines the town’s eastern boundary. Graycliff and its environs are inspired by the Yellowstone River Valley where I grew up, but are themselves entirely fictional.

Graycliff and the towns that surround it (including an Army base called Fort Brand) replace the Tri-Cities in southeast Washington–in the setting of Tamed Hearts, the whole geography of the area is over-written to make room for the fictional city. I actually started building Graycliff in my imagination years ago for (of all things) a zombie outbreak story. I never did start the story in earnest, since I never had an especially clear idea of what I wanted to do with it, but I always remembered the fictional town. I made the decision to use a fabricated city (and surrounding area) to drive home the idea that despite the familiar trappings of Tamed Hearts–cars, cell phones, computers, streaming videos–the story is, at heart, a fantasy narrative. (Because, you know, the looming threat of werewolves wasn’t enough of a reminder.) Like most urban fantasy, it only pretends to take place in our world.

My hometown informs a great many of the details about Graycliff–its general layout, major features, size, and especially ‘personality’. Graycliff is a complex environment, as any gathering of people must be. People are complex creatures, after all, and throwing thousands of them together in a confined area would have to compound that complexity. That’s a long-winded and self-important way of saying the number of people is 1) a level I feel comfortable with, and 2) gives me excuses for particular things happening. For instance, since I have a pretty good idea of how the police department operates in my home town, I use that as a basis for the way things work in Graycliff (Graycliff is actually a little bigger, but I have a place to start, at least). 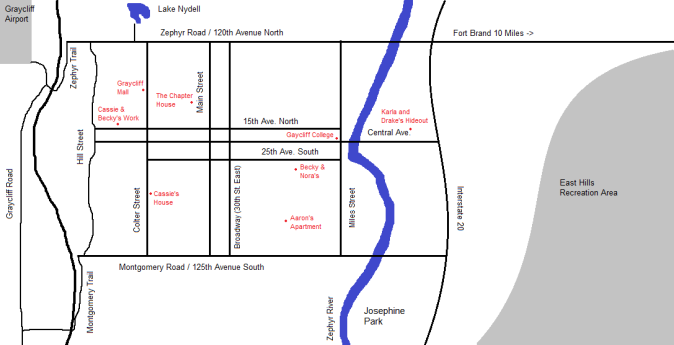 This ever-so-sophisticated map might serve as a visual aid if you’re familiar with Tamed Hearts already. Hey, what’s that red dot just west of Main Street?