Becky was the last character of Tamed Hearts to take shape. But she’s arguably the strongest, both as a narrative character, and in terms of what she can do. The simplest shorthand term to describe her is probably ‘action heroine’. (‘Ice queen’ also has some applicability.) 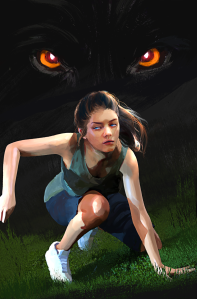 Becky works with Cassie, and they’ve recently begun an actual friendship after an incident detailed in a prequel story called “Crawl Before You Walk”. Aaron and Cassie have both had fairly normal lives, but Becky’s back story is something very different. I’d like readers to discover her past a piece at a time, and there are no shortage of clues. But one of the first things you’ll learn about Becky is that she’s in Graycliff because she is hiding. (After reading her first chapter, you might find yourself wondering what could be bad enough to force her into that position. Don’t worry, you’ll find out eventually.) Becky doesn’t like talking about her past, or herself in general, so it will take some time and effort for her friends–and readers–to get the whole story. But it’s there to be gleaned, for those who look.

What’s immediately obvious, though, is that Becky is composed, controlled, ruthless, and cunning: that comes across loud and clear from her first appearance in Tamed Hearts. She mostly wants to keep to herself. But when something she cares about is threatened, Becky reacts with immediate and decisive action. Although she’s not outwardly very impressive at just over five feet, Becky’s practiced at saying disturbing things with a straight face and a heaping helping of conviction. (Her co-workers–Cassie included–have a habit of affectionately referring to her as “Wednesday”.)

Becky may not be brilliant, but she’s a long way from dumb. She is savvy, cunning, and analytical, not to mention very practiced at thinking on her feet. She’s not exactly the most socially adept person, but in practical matters, her self-confidence is total: if she doesn’t know how to do it already, she’ll figure it out.

It’s no spoiler to say that Becky is a werewolf, and she’s remarkably good at it for somebody who doesn’t want anything to do with other Wolves.