Aaron is the last point-of-view character to make an appearance in Tamed Hearts, Wild Souls–but he was actually the first to take shape.

After listening to Florence + The Machine’s song “Howl”–which isn’t about a werewolf, but it uses lots of werewolf imagery–the idea popped into my head that I wanted to write a werewolf character. They’ve been my favorite monster for a long time, so it was only natural. At first, I was really only considering a general context, I didn’t have a particular story in mind. But Aaron was the character that coalesced around that idea. Aaron is the ‘good’ sort of werewolf–an ‘Omega’. While the Full Moon is terribly difficult to resist, Aaron’s years of practice allow him to suppress his Change–but only temporarily. Still, turning into a monster one month out of three or four is better than every month. 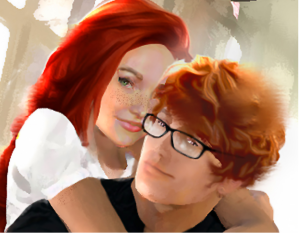 That looks like Aaron, but who’s that cute redhead behind him? We’ll meet her NEXT week.

Aaron is a bookish sort, and he knows a lot about werewolves, but mainly from a distance. He’s interacted with several of his peers–other werewolves who were turned by accident or who fled their Packs–over a long period of time. Part of that time he’s also spent learning how to suppress his Beast through careful trial and error. Mostly, he just wants to live as normal a life as he can manage. Sounds like a nice guy, doesn’t he? Well, Aaron’s not without his flaws. When things are emotionally fraught, he tends to withdraw, and he has a tendency to let the pretty ladies in his life call the shots, even if he maybe shouldn’t. (Fortunately for Aaron, both of the ladies closest to him are exactly the type to call him out on this wishy-washy nonsense.)